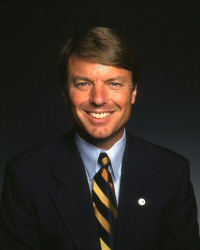 A former senator and personal injury attorney, John Edwards has attracted attention throughout his political career for his dramatic personal story, for his increasingly progressive political views, and, of course, for his good looks. A member of the moderate, pro-business New Democrat Coalition” while a senator, he has increasingly emerged as a standard bearer of the mainstream liberal and populist wings of the Democratic Party. He consistently wins online straw polls on DailyKos and is considered the favorite candidate of the liberal blogosphere because of his spirited opposition to the war in Iraq and his championing of relatively aggressive solutions to problems like health care, the decline of the middle class, and the environment.

John Edwards was born in 1953, the son of a South Carolina textile worker. Growing up mostly in North Carolina, he was educated there and remained there after marrying his wife, Elizabeth, in 1977. In 1993, already one of the state’s best known and wealthiest personal injury lawyers, Edwards co-founded his own firm and took a highly publicized case involving the gruesome death of a three-year-old girl. It resulted in the largest award in North Carolina history.

During that time, Edwards’ eldest child, Wade Edwards, died in a car accident. The death apparently motivated Edwards to take stock of his life and prompted him to enter politics. In 1998, he defeated incumbent Lauch Faircloth and became North Carolina’s junior senator.

In 2002, Senator Edwards made his most controversial decision when he cosponsored the senate’s Iraq war resolution along with Senator Joseph Lieberman. Since then he has apologized for his votes and has emerged as one of the loudest Democratic voices against President Bush’s Iraq war policies.

In 2004, Edwards entered the national stage with a campaign for the U.S. Presidency, successfully wooing many party progressives and populists with his widely praised “Two Americas” stump speech, in which outlined his viewings on the growing income gap between the wealthy and other Americans. After withdrawing from the campaign after being defeated by John Kerry on the “Super Tuesday” primaries, Edwards was selected by Democratic nominee Kerry as his running mate. Although Kerry did not win the hotly contested election, Edwards’ performance as a Vice Presidential candidate was widely praised. Activists and others agreed that the former Senator was well positioned for the 2008 election.

Indeed, Edwards announced his intention run for President in ‘08 early on, in the winter of 2006. While his strong poll showings in the regards to the Iowa caucus and the New Hampshire primary have attracted attention, press coverage has largely focused on the health of Senator Edwards’ outspoken wife, Elizabeth Edwards, who has been diagnosed with treatable but incurable cancer – as well as on his occasion mild political disagreements with her. (She is an open supporter of gay marriage, Edwards has said he is “not there yet.”)