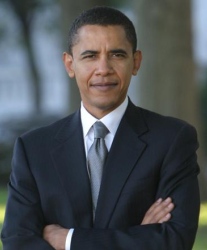 Emerging out of near obscurity to instant nationwide fame via a single speech, Senator Barack Obama is undoubtedly the fastest rising star in American politics. Still in his mid-forties, the junior senator from Illinois has drawn praise from a wide swath of the political world. Liberals and progressives like his early opposition to the Iraq war, his tough talk against the Bush Administration, and his strong support for a social safety net and a certain amount of government activism in fighting social ills. Other Democrats, and even some well-known conservative Republicans, like his talk of unity, his strong but low-key and conciliatory approach, and his willingness to discuss spiritual themes. Accused by his detractors of being inexperienced and of trying to be all political things to all political people, there is no doubting his intelligence, his speechmaking ability, his likeability, and his quick wit.

Barack Obama was born in the new U.S. state of Hawaii in 1961, the son of a Kenyan father and a Kansan mother. Obama’s parents broke-up when he was still a toddler and the elder Barack Obama returned to Kenya. When his young mother remarried later on, young Barack moved to Jakarta with her and his Indonesian stepfather. He returned to the U.S. a few years later, attending school in Honolulu until he left for college, first at Occidental College in Los Angeles and later completing his degree at New York’s Columbia University.

Not long after his graduation in 1983, Obama took his first steps towards politics by moving to Chicago and taking a job as a community organizer. A few years later, he’d make another big move towards politics when he was accepted to Boston’s Harvard Law School, where he excelled and became the first African-American to become president of the prestigious Law Review — a highly notable accomplishment at a school once infamous for its social, racial, and religious exclusivity.

After completing his studies, the budding legal star was offered a publisher’s advance for his memoirs. He accepted the offer and spent six months writing the acclaimed book that would later become a sort of calling card, Dreams from My Father: A Story of Race and Inheritance. The memoir addressed a number of touchy issues including his mixed parentage, the absence of his father growing up, his religion (he is a member of Trinity United Church of Christ, a large, predominantly African-American, church located in Chicago), and his sometimes difficult growing pains, including a certain degree of marijuana and occasional cocaine use during his first two years of college. These vices were far from uncommon in college students of his generation, and the admissions have proven uncontroversial.

With his first book written, Obama divided his time between working at a law firm (including a number of pro-bono cases), teaching law at the University of Chicago, and volunteer work. He also found time to get married to his girlfriend of four years, Michelle Robinson. Today, Barack and Michelle Obama have two elementary-school age daughters.

In 1996, Barack Obama ran for and won a seat in the Illinois State Senate, where he worked on issues ranging from electoral reform to racial profiling and death penalty reform. Although he lost a primary bid for Congress in 2000 against popular longtime congressman Bobby Rush, he was twice re-elected to his State Senate seat. In 2004, State Senator Obama announced his wish to become the junior senator from the state of Illinois in the United States congress.

From this point on, the young politician seemed to be living a charmed life. In the primary, his multimillionaire opponent was dogged by scandal, while Obama racked up important endorsements. In the general election, his Republican rival, state attorney general Jack Ryan, was plagued by charges of sexual cruelty leveled by his actress ex-wife.

With his chances of election growing, the charismatic Obama was selected to give the keynote speech at he 2004 Democratic convention. The speech wowed millions of viewers and was widely hailed as one of the strongest speeches in recent political history. Though he had been working in politics for nearly all of his adult life, Barack Obama became an “overnight” political star. Then, as if to clinch the matter, Jack Ryan dropped out and apparently desperate Illinois Republicans went in search of a replacement. When the new Republican candidate turned out not to be legendary football coach Mike Ditka, as was rumored, but Alan Keyes, a quirky former presidential candidate, radio host, and rightwing ideologue from out of state, victory for Obama seemed about certain. The 43-year-old state senator won the all-African-American match-up by more than seventy percent margin.

Talk of possible presidential aspirations was already rife as Barack Obama accepted the oath of office and entered the senate. For the next five years, mention of his name in the national press was nearly always accompanied by speculation about whether or not he would be entering the 2008 race, despite what some saw as a relatively thin political resume against the probably inevitable candidacy of fellow senator and former first lady Hillary Clinton. Nevertheless, Senator Obama’s initial job was to make a place for himself in the famously collegial house of congress. Though some liberal writers have criticized his record in the senate as excessively cautious, he was active on such issues as immigration reform, energy, and foreign policy. With the 2008 presidential contest heating up, he also became involved in such issues as the Iraq war and benefits to the families of service-members, as well as the vetoed SCHIP health care subsidy for children.

Senator Obama announced his presidential candidacy officially in February of 2007 and made worldwide headlines as the first African-American candidate with a serious chance of reaching the White House. His campaign’s fundraising prowess, particularly in terms of numbers of doors, was the talk of the political media. Even his cigarette smoking became a minor issue on Fox News and elsewhere and he announced on an April “Late Night with David Letterman” that he had quit thanks to pressure from his wife and the frequent use of Nicorette gum. Though he faces stiff opposition from Hilary Clinton and a significant competition from the more populist-leaning John Edwards, political rock star Senator Barack Obama is clearly going to be a major force in American politics for the foreseeable future.

Barack Obama on the Web:

BarackObama.com
The official website of the Obama ’08 campaign. Includes videos, a DailyKos style group blog, news and upcoming, and links to a number of other campaign-related sites.