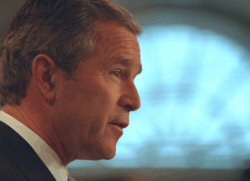 43rd President of the United States

George W. Bush ran as a “compassionate conservative” in 2000, pledging to be a uniter, not a divider. Instead, W has become one of the most polarizing presidents in our nation’s history. He became president without winning the popular vote, yet he governed as if he had won in a landslide. Regardless of how one feels about his policies, Bush and his advisors have been remarkably effective in getting what they want, from huge tax cuts to the war in Iraq. This effectiveness has solidified his support on the right, while infuriating the left.

While Bush has been effective in getting his agenda passed, many of us believe that his competence needs to be called into question regarding how decisions are made, and whether he’s willing to address problems that arise. From WMD to the situation on the ground in Iraq, the number of blunders are starting to pile up. (updated 5/9/04 by Gerardo Orlando)

An email to Andrew Sullivan’s blog brilliantly explains the use of “thin pretexts” by politicians. Read it and see if you agree that this nicely sums up the Bush and Rove approach to politics and governance.

Jacob Weisberg has been compiling hilarious “Bushisms” for years in Slate demonstrating Bush’s difficulties with the English language. In “The Misunderestimated Man – How Bush Chose Stupidity”, Weisberg introduces his new compilations of Bushisms and provides a sharp indictment of Bush’s approach to his job.

Andrew Sullivan explains how President Bush “has done a huge amount to destroy the coherence of a conservative philosophy of American government.” Sullivan argues that conservatives need to consider Kerry.

BUSH 41: Thomas Friedman has an interesting piece in the Times explaining how we could use a president like George H. W. Bush in office during these troubled times. He also explains how John Kerry, not George W. Bush, is the true heir to Bush 41’s legacy.

Update: George W. Bush has become a hipster icon of late. When he shared his paintings with the world and mused about his love of his iPad, Bush went from the uncoolest person on the planet to an unusual reclamation project. Without his power, he became a harmless, kind of genial grandpa with a lot of time on his hands. Sure he’ll never start dating his younger fanbase a la Jeff Goldblum, but he’s become one of the most surprising image rehabilitations in history.